yathrAmour
Home Culture A YATHRA THROUGH THE INDIAN CURRENCY NOTES 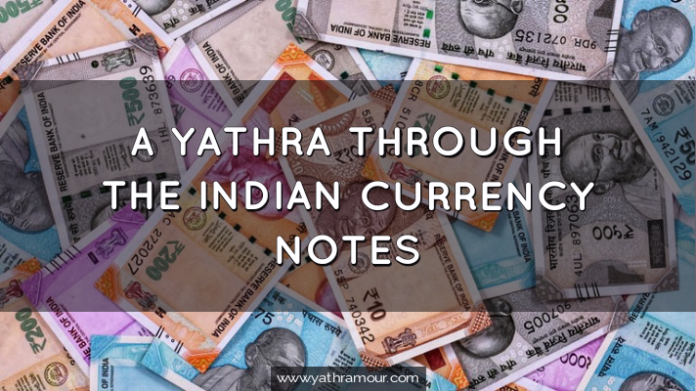 Indian currency notes are available in these denominations now – 10, 20, 50, 100, 200, 500 and 2000. These Mahatma Gandhi series of currency notes, except for INR 2000 note, are capable to take us through an amazing journey through marvellous monuments in India. Let’s take the “Currency Yathra” with Yathramour.

This brown coloured 10 Rupee note, released in 2018 has the photo of Mahatma Gandhi on one side and on the other side, the picture of a wheel can be seen. This is from the famous Konark Sun temple. This temple is around 65 kms away from the capital city of Bhubaneswar, and is 36 kms away from the very famous Puri Jagannatha Temple. Both these temples are situated on the shores of Bay of Bengal, and the sailors of olden times often described Konark Sun Temple as the “Black Pagoda Temple” and the other as “White Pagoda temple”.The whole temple is built in the shape of a chariot (the chariot of Surya, the Sun GOD) by King Narasimha Deva I of the Eastern Ganga Dynasty, and follows the Kalinga architecture in its construction. The 100-foot-long Chariot has 24 wheels and 7 horses of which only 6 are remaining. One of those 24 wheels is what we see in the 10 rupee note. The wheels, which are of 9 feet diameter, function as sundials that can accurately calculate the time. The temple was heavily destroyed, and is now under reconstruction.Travellers always combine Puri Jagannatha temple and Konark together in their trips. The picturesque road from Puri to Konark crosses Balukhand Konark Wildlife Sanctuary, and passes by Ramchandi and Chandrabhaga beaches. Ramchandi, where the Kusabhadra River enters the Bay of Bengal, is the more serene of the two. Other places of interest in the Bhubaneswar – Puri route are the handicrafts villages of Raghurajpur and Pipili.

The Ellora caves are situated in the Auranghabad district of Maharashtra. It is 300-350 kms away from Mumbai, the capital city. A complex of 34 cave temples and monasteries representing Hinduism, Jainism, Buddhism are collectively known as Ellora caves.The Cave 16 of Ellora caves – the great Kailasa Temple – is the largest single monolithic excavation in the world. The Great Kailasa, a freestanding, multi-storied temple complex dedicated to Lord Shiva is a 1300 year’s old architectural marvel that it is carved out of a single volcanic basaltic rock of the Charanandri hills. Apart from its impressive size, the temple is also remarkable for its sculptures, as well as for the fine workmanship of its other architectural elements. The green & yellow colored 20 rupee note, introduced in the year 2019 has the picture of a part of this Great Kailasa.From the year 1983, Ellora Caves is a UNESCO World Heritage Site. It is noted that Mughal King Aurangzeb sent 1000 people to destroy the Kailasa temple in theyyear 1682. They worked for 3 years but they could break and disfigure a few statues only and finally, Aurangzeb gave up on this task.

From the Ellora Caves, 100 km away is the Ajanta Caves which is set in a valley carved between two mountains with a river running nearby. Travellers always include Ajanta and Ellora caves together in their itinerary. Also, you can add in your itinerary, the Daulatabad Fort, which is just 14 kms away from Ellora caves.

The village of Hampi in the Hospet Taluk of Bellary district, Karnataka was once the capital of the wealthiest and prosperous Vijayanagara kingdom of India. It is around 350 kms away from the capital City of Bengaluru. As we walk through the remains of Hampi’s magnificent forts, palaces and gateways, we will get a glimpse of the excellent architecture of those times.The group of Monuments at Hampi, which speaks volumes about the history of a prosperous and rich kingdom in the 14th century which was eventually ruined owing to the attacks made by the Moghuls, is a UNESCO World Heritage Site from the year 1983. The major monuments includes the Virupaksha temple, The Queens bath, Krishna Temple complex, Elephant stable, Vitthala temple complex, Pattabhirama temple complex, Lotus Mahal complex, etc.

The Blue colored – 50-rupee note has the picture of a stone chariot shrine which is a part of the Vijaya Vittala temple complex. This stone chariot was built by King Krishnadevaraya of the Vijayanagara Empire during the 16th century, who got fascinated with the Konark Sun temple chariot while fighting a battle in Odissa. In India, there are 3 temples made of stone built in the shape of a chariot. The other two are the Konark Sun Temple of Odisha and the Pancha Rathas of Mahabalipuram, TamilNadu.

Rani Ki Vav, situated in the district of Patan of Gujarat, is a richly cultured monument in the shape of a stepwell. It is built in the 11th century by Queen Udayamati in the memory of her husband Bhimdev 1 of the Chalukya dynasty. This monument is 130 kms away from the capital city of Ahmedabad.The 64m long, 20m wide & 27m deep Rani ki Vav is shown in the 100-rupee lavender colored note. Rani Ki Vav was built on the banks of Saraswati river, and it was later flooded by the water from the river and later silted over until the 1980s, when it was excavated by the archeologists. The magnificent carvings of this stepwell was found in pristine condition when it was restored.Designed as an inverted temple highlighting the sanctity of water, Rani ki Vav is divided into seven levels of stairs with sculptural panels of high artistic quality. There are 200+ pillars and around 500 sculptures of god in the monument. This is added to UNESCO World Heritage list in the year 2014.

The Sanchi stupa, with its four ornamental toranas or gateways, is a fine example of the development of the Buddhist architecture and sculpture beginning from the third century BC to the twelfth century AD. This Buddhist complex is situated in the Sanchi Town of Raisen District, Madhya Pradesh. It is around 60 kms away from the capital city of Bhopal.The Orange colored 200-rupee Indian currency note has the picture of this oldest stone structure in India, which was commissioned by the Mauryan emperor Ashoka in the 3rd century BCE. After the victory of Kalinga war, Ashoka was in grief after witnessing the mass deaths and got attracted to Buddhism later. He has built the Great Stupa at Sanchi to keep the relics of Buddha.Sometime after the 12th century CE, Sanchi was abandoned, and its monuments fell into disrepair. They were later discovered in 1818 and restoration work was completed within 38 years. The Great Stupa and Sanchi’s other Buddhist monuments were collectively designated a UNESCO World Heritage site in 1989. On the southern side of the Stupa, there is a Lion Capital Pillar with inscriptions on it and is similar to the Sarnath Lion Capital Pillar.

The Red Fort, a historical fortification in the old Delhi area, witnesses the Indian Prime Minister hoisting the tri-color flag of India on every Independence Day. This fort constructed in the year 1639 in the Indian Capital City is shown in the grey-colored 500 Rupee Currency note introduced in the year 2016.Red Fort or Lal Qila was built by the Mughal Emperor Shah Jahān along the banks of the river Yamuna and is designated a UNESCO World Heritage site in 2007. This was the residence of many Mughal Emperors. The fort’s artwork synthesises Persian, European and Indian art, resulting in a unique Shahjahani style rich in form, expression and colour. Red Fort is one of the building complexes of India encapsulating a long period of history and its arts.The fort was plundered of its artwork and jewels during Nadir Shah’s invasion of the Mughal Empire in 1747. Most of the fort’s precious marble structures were subsequently destroyed by the British following the Revolt of 1857. The Koh-i-Noor diamond, the jade wine cup of Shahjahan and the crown of bahadur Shah II are among the prized possessions looted by the British.

The magenta colored 2000-rupee note was introduced inthe year 2016. It features an illustration on its reverse of the Indian Space Research Organization’s succesful Mangalyaan or Mars Orbiter Mission that was launched on Nov. 5, 2013. It was India’s first venture into the interplanetary space. 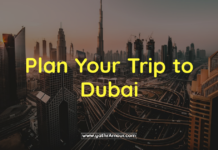 Could Shanghai Disneyland Be Cooler Than Walt Disney

Top Reasons to Go to Barcelona