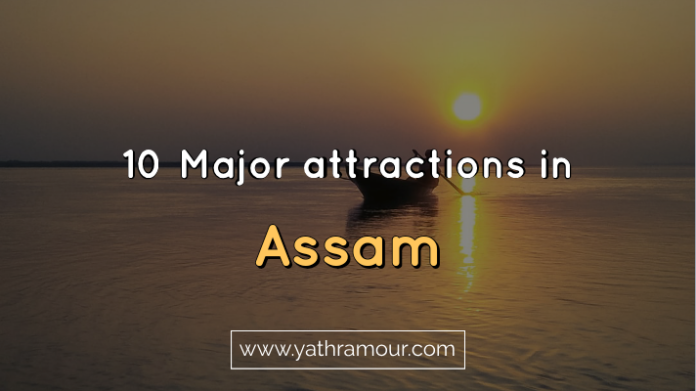 The State of Assam is the gateway to North East India. Capital of Assam is Dispur and the largest city of the state is Guwahati.

Assam is famous for its freshening world class tea, the Muga (Golden) and Eri (Ahimsa) silk, Natural resources like Coal, Petroleum products and minerals. The river Brahmaputra (the only male river in India) flow across the heart of the state and is a lifeline to the people of Assam.

Kamakhya Temple dedicated to mother goddess Kamakhya, is one of the oldest of the 51 Sakthi Peedas. This temple is situated on the Nilachal Hill in western part of Guwahati city. The temple consists of four chambers: garbhagriha and three mandapas locally called calanta, pancaratna and natamandira aligned from east to west. Being the centre for Tantra worship this temple attracts thousands of tantra devotees in an annual festival known as the Ambubachi Mela. Another annual celebration is the Manasha Puja. Durga Puja is also celebrated annually at Kamakhya during Navaratri in the autumn. This five-day festival attracts several thousand visitors..

The Kaziranga National Park celebrated its centennial in 2005 after its establishment in 1905 as a reserve forest. The sanctuary, which hosts two-thirds of the world’s great one-horned rhinoceroses, is a World Heritage Site. Kaziranga is home to the highest density of tigers among protected areas in the world, and was declared a Tiger Reserve in 2006. The park is home to large breeding populations of elephants, wild water buffalo, and swamp deer.

It is recognized as an Important Bird Area by BirdLife International for conservation of avifaunal species. Kaziranga is a vast expanse of tall elephant grass, marshland, and dense tropical moist broadleaf forests, crisscrossed by four major rivers, including the Brahmaputra, and the park includes numerous small bodies of water.

This waterfalls is situated Panimur, a small village located in Dima Hasao district of Assam, and is 220 kms away from Guwahati via Nagaon and Lanka. It is also called as Mini Niagra falls. This place is a picnic spot now and has a good potential to become a well known eco tourism spot in Assam.

MAJULI, THE LARGEST RIVER ISLAND IN THE WORLD

Majuli, is a district of Assam, and is an island in the Brahmaputra river. It is around 350kms from Guwahati and can be accessed from the city of Jorhat by Ferry service. The nearby airport is in Jorhat. Majuli has several satras or monasteries. It is the home of new-Vaishnava culture started by revered Assamese saint Srimanta Sankardeva. Auniati Satra is famous for the Palnaam and Apsara dance by its monks, while the Dakhinpat Satra is famous for its Rasleela. The Somaguri Satra is very famous for its mask making. Also, Majuli is very famous for its unique tribes and villages. The inhabitants of this island comprises of a mixture of tribal groups and communities such as the Mising tribes, Deoris, Sonowal Kacharis and the Ahoms.

This spot is emerging as one of the hottest ecotourism spots in the entire North East, and is 65 kms from Guwahati city. The lake is situated at the foothills of Garo hills bordering Assam and Meghalaya. , and is naturally created as a result of the earthquake of 1897. This is a perfect location to enjoy bird watching. It is surrounded by deep forests, tea gardens and small and discrete villages.

The Assam silk industry, now centered in Sualkuchi, is a labor-intensive industry. Sualkuchi is a multi-caste town of Kamrup (rural) district of Assam, situated on the north bank of the mighty Brahmaputra at a distance of 30 km west of Guwahati.

There are 3 major types of indigenous wild silks produced in Assam.

Kautilya’s Arthashastra, a political literature of the 3rd century BC, makes references to the highly sophisticated silk clothing from Assam. Kautilya mentioned the production of Dukula, a kind of Silk fabric produced from cocoons in ancient Assam. This Dukula, as mentioned had three varieties. The first variety which was white in colour and very soft in texture was known as Vangaka. It can be identified today as Paat Silk. The second variety known as Paundraka can be identified as Eri silk while the third variety which was known as Suvarnakudya due to its golden colour can be easily identified as Muga silk.

The knowledge of sericulture probably arrived with the Bodo groups who migrated from China around the period of 3000-2000 BC. Moreover, there was another trade of silk through the southwestern Silk Road which started from China, passed through Burma and Assam, finally getting connected to the main Silk Road in Turkmenistan.

This is a UNESCO Natural World Heritage site, a Project Tiger reserve, an elephant reserve and a biosphere reserve in Assam, India. Located in the Himalayan foothills, it is contiguous with the Royal Manas National Park in Bhutan. It gives a deep forest experience for visitors and visitors can do river rafting here.

This island is the smallest inhabited river island in the world, and is in the river Brahmaputra. The Umananda temple dedicated to Lord Shiva is here. The rock-cut figures of Lord Shiva, Surya and Ganesha shows the architecture marvel and craftsmanship of India. This island is named as Peacock island by the British people because the shape of the island looks like a peacock feather. To reach the umananda temple , one has to cross the river in a boat. It can be reach from Guwahati and North Guwahati by ferries and steamers. These boat service is available from the Kachari ghat. There is also a ferry service that is available from 7 am to 5 pm.

This is a well known tourist attraction near Kaziranga National Park. The pristine clear waters falling from the top of the hill and accumulating in the natural pond below is just praiseworthy. The wet rocks and greenery support this Natural beauty while adding extra grace to the whole aura. Visitors take take a dip in the pond below the soothing waterfall. This waterfall is 240 kms from Guwahati.

It is the only hill station in the state of Assam and is located at a distance of around 330 kms from the city of Guwahati. This is also known as White Ant Hillock. The beautiful hills, landscapes, valleys, waterfalls, the charming beauty of the crystal clear waters of Haflong Lake attracts tourists to this place. Jatinga is another famous tourist spot located on a spur of the Haflong ridge which is famous for the phenomenon of bird suicides. It is popular with the tourists are the ruins of Mailbong, the erstwhile capital of the Dimasa Kachari kingdom. The nearest city to Haflong is Silchar, which is 100 kms away. This place is Serene and calm and at the same time rustic and wild. 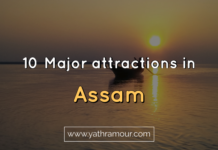 ABOUT US
Our love for travel and the world has brought us to this concept of Yathramour, and we, Team Yathramour believes in a personal approach to travel.
Contact us: yathramour@gmail.com
FOLLOW US
© yathrAmuor